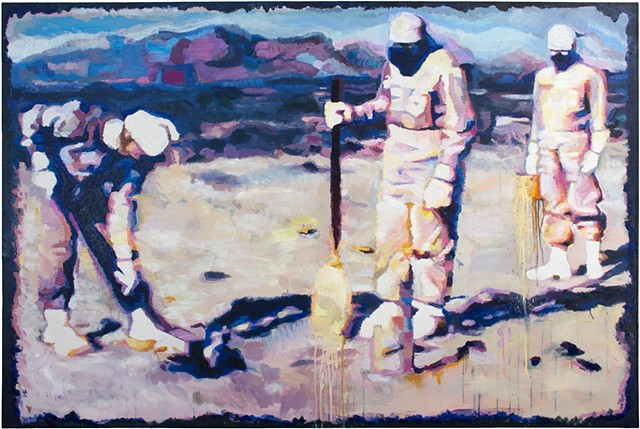 This painting shows a group of three individuals that appear like phantoms in cloak, two of which are standing around with tools in their hands, staring at the other individual on the left.  This individual is crouched down, but whose tool is completely lost due to the re-mediated disruption of the reference being pushed to levels that dissolve the details of the activity.  Once more this uncertainty promotes a kind of suspicion-induced paranoia when it comes to grasping the true association of these individuals and the intent of their involvement.  The uniformed outfits seem to suggest something that is potentially dangerous and the trail of ultramarine blue shadows not only lead back to the figures involved but to the shadow of an object no longer visible. One can get the feeling that there are somewhat “invisible” forces at work that are either controlling or being controlled by these individuals. All the while, the run down and neutralized colors run in currents between figures, who seem to almost emerge like electric conductors in cool outlining hues.  The color seems to place these figures in some time period decades ago, while the iconography seems to suggest a scientific/futuristic feel. Another detail comes about when examining the title "Counter Measures" that seem to suggest that the figures are involved in some form of activity that will ensure protection from some outside threat, but that threat isn't present, or is it?