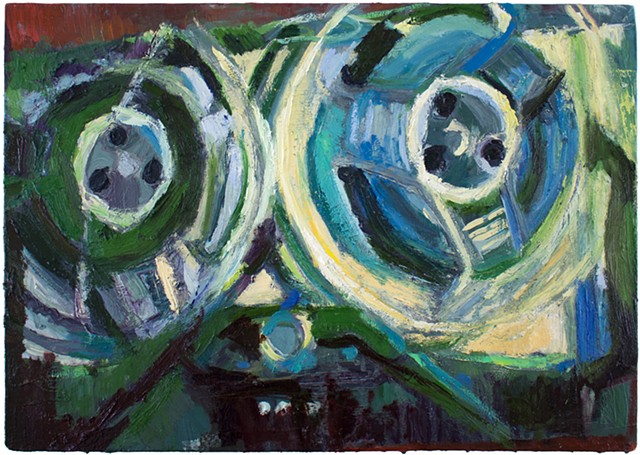 Privacy is like a mirage, a vision that appears truthful and comforting but is really a lie and a deceiving structure. This painting is a symbolic gesture of the lack of privacy that exists in these times. Even though this typical “reel-to-reel” recording device is considered a method of the past (an analog device), it stands as a relic of how far surveillance has survived and been used by those in power [against those of less]. The painting rests on the wall of a gallery and welcomes viewers to come closer, approach and speak around it. The large gestures of paint strokes and scrapings from a palette knife create circular forms that look less like “reels” and more like large-scaled eyes that stare out at the viewer. The paint scraped away, shriveled and dripping down the picture plane, takes on an aged and almost diseased looking appearance. A toxic, looming symbol of the everyday threat of counter surveillance on individuals’ privacy everywhere. Painting is an archaic medium that is used here to depict an archaic recording device. Yet, both are still being applied as a viable means to capturing/entrapping human’s [emotion], identity and voice.