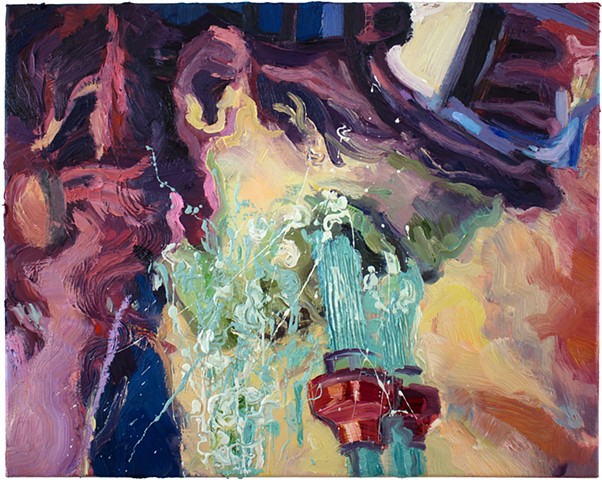 A painting that’s fit for a science lab. A magnified face with goggles leans forward and is sprayed with an eye washing mechanism. This painting is void of background except for a quasi-psychedelic coloration of painted passages. These swiftly moving brushstrokes produce a textural energy throughout each corner of the canvas. A mixture of warm tones of reds, yellows and oranges create a stark contrast from the foreground of cool turquoises and blues. In fact, blue is used very sparingly, but it has a resounding ability to keep the viewer’s eyes moving in a counter-clockwise manner. From the eye washing mechanism, to the rimmed goggles, to the strap of the goggles and down to the jacket. Another major element in this painting is the cropping, which turns what might be an ordinary set of events, into a frozen, detached spectacle. This isolating cropping shuts out external information from allowing the viewer to generalize this event as something mundane. It instead elevates the mundane, transforming it into the uncanny. sRGB embed