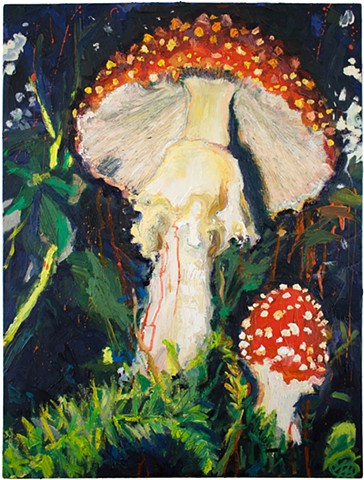 A dark, foggy, dew-filled night, where the red-capped, white-spotted fungi form. A mushroom whose red caps seem to almost “pop” out from the darkened background like neon beams. At the same time, they appear to simultaneously be hiding behind electric yellow stems and sap green vegetation. The perspective of the painting is that of an ant, where the viewer is looking up at a larger-than-life mushroom looming over them. The gills of the mushroom carved out in sgraffito fashion, leaving valleys of textured lines and creating diversity throughout the painting’s surface.

This type of mushroom, the Amanita muscaria is an iconic and widely referenced mushroom throughout popular culture. A mushroom that grows naturally and has been used in religious ceremonies for over four thousand years by people of Siberia, India and Afghanistan. Scientists, researchers and scholars have long suspected that this type of mushroom was the referenced “plant” that ancient cultures extracted the juices from to create the drink soma. A recipe that has been strongly contested due to the various derivatives of the Vedic Sanskrit texts.

This mushroom has been classified as poisonous, inedible, as well as an illicit and a prohibited “Schedule 9” substance throughout Australia, The Netherlands and the United Kingdom. Contradiction is inherent to this mushroom. A fungus that can mean many different things, depending on where it is seen and who it is seen by. Demonized and classified as illegal to some, revered and celebrated religiously by others. This painting shows the mushroom existing in its natural habitat, standing upright and proving its resilience despite years of controversy and demonizing classification. Still forming and growing as it had for centuries upon centuries.