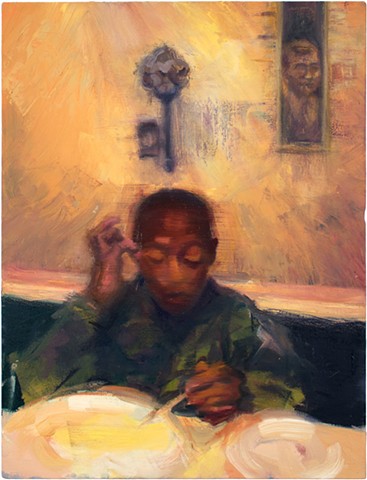 This is yet another work that utilizes an object (a key) as a symbolic gesture. As mundane and sparse a setting as it might first appear, an oversized key hang over the main figure and almost demands the attention of a viewer. The key is symbolic for opening doors, and in this case, it relates to a past. Which, can be a very positive or negative thing, depending on the way the viewer. The portrait that hangs on the wall is that of Nelson Mandela, an iconic and revolutionary figure for not only what he went through in life but for what he stood up to and fought for. Nelson Mandela was an advocate of human rights, and fought to conquer/end apartheid and combat institutionalized racism. However, the warm color scheme made the portrait of Nelson Mandela look almost like a white business man looming over the foreground figure. Based on the viewer’s interpretation, the key can unlock a positive message for anyone who looks for a strong “father figure” role model or can unlock a dark and undeniable past of oppression.